UPDATE: This presentation was video recorded and is available on our Past Presentations page courtesy of Don Hill. 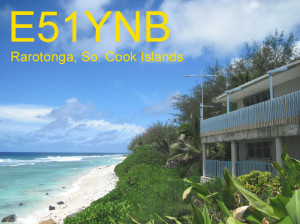 My presentation is about two trips to Rarotonga in the South Cook Islands by Wayne Overbeck, N6NB, and Carrie Tai, W6TAI. Wayne operated the 2012 ARRL phone DX contest as E51YNB. Carrie operated the 2012 IARU Radiosport Championships as E51TAI. She not only turned in an excellent score in her first contest as a DX station but also was featured in QST to promote this year’s IARU contest (see pages 5 and 87 of the June, 2013, QST).

We hauled ham gear (including a triband beam antenna and an amplifier) in our luggage, but both trips were really vacations more than DXpeditions. The slide show explains why.

Carrie was first licensed in January, 2009 and got her extra class license four months later–at an exam session sponsored by SOARA. She quickly became active in VHF contesting and was the #1 rover in the country in the June, 2010, VHF contest.

I’ve been licensed for 56 years now and have been involved in many aspects of amateur radio. I was named Radio Amateur of the Year at the 1980 Dayton Hamvention and later served four terms as the ARRL Southwestern Division Vice Director.