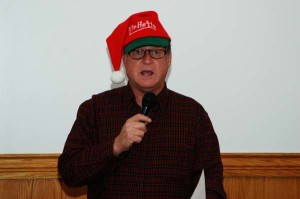 In lieu of a regular club meeting in December, SOARA presents a holiday social gathering for its membership, friends and family.

With the rapidly rising cost of food and one of past favorite spots closing we have decided to return to holding a buffet diner at the Murray Center in the Palo Verde room (our normal meeting spot).
Diner will be a catered buffet with salad, main entree (vegetarian or meat) and desert. The club will provide water, soda and some sparkling cider. You are very welcome to “bring your own bottle” of wine or beer, no liquor is allowed.
Please RSVP by purchasing tickets using the “Buy Tickets Online” button above.

Also, we will announce a few special awards for our membership.

The Richard Coyne WW7D Memorial Award was created in 2005 to recognize an individual SOARA member who had made an outstanding contribution to the club and the HAM community throughout the prior year. The award is traditionally presented at the annual SOARA Holiday party and banquet in December.

The rotating award was created by the SOARA Board in memory of Richard Coyne WW7D, a very active member of the HAM community, longtime SOARA member and past SOARA board member. Richard passed away unexpectedly in May 2002. Richard would certainly been a worthy recipient of the award that bears his name.

There is a cost for this event. Non-members are welcome to purchase tickets and participate with us.