Skip to content Skip to main menu
Home › About › What is Amateur Radio? 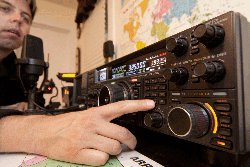 Most of the time, it’s the most fun you can have with a radio. It’s a way to talk with people around the world, or even orbiting the world; to send e-mail without any sort of internet connection and to keep in touch with friends across town or across the country. But it is called the “Amateur Radio Service” because it also has a serious face. It’s a very important emergency communications system too. When cell phones, regular phones, the internet and other systems are down or overloaded, Amateur Radio still gets the message through. Radio amateurs, often called “hams”, enjoy radio technology as a hobby that’s the fun part. But it’s also a service, a vital service that has saved lives time and time again when regular communication systems have failed.

Amateur Radio kept New York City agencies in touch with each other on September 11th. When hurricanes Katrina, Rita and Wilma destroyed other communications, ham radio provided vital life-and-death capabilities until systems could be rebuilt. Countless lives have been saved where skilled hams acted as emergency communicators to render aid, whether it’s during fires, floods, earthquakes or a tornado. But most of the time, hams do what they do because it’s just plain fun.

Who are these Hams?

There are almost 700,000 Amateur Radio operators in the USA and over two million in nearly every country in the world. They come from all walks of life–movie stars, missionaries, doctors, students, politicians, truck drivers and just plain folks. They are all ages, sexes and income levels linked by their interest in wireless communications technologies. There are more licensed American Amateur Radio operators now than ever before in history.

They form a worldwide community of licensed operators using the airwaves with every conceivable means of communications technology. It is made from people who enjoy learning and being able to transmit voice, data and pictures through the air to unusual places, both near and far, without depending on commercial systems.

The Amateur Radio frequencies are the last remaining place in the usable radio spectrum where you as an individual can develop and experiment with wireless communications. Hams not only can make and modify their equipment, but create whole new ways to do things.

Computer hobbyists enjoy experimenting in wireless digital communications, software defined radios (SDR), long-distance digital and image transmissions. “Off the grid” power sources and other concepts undreamed of just a few years ago are common in the ham community.

While a Morse code key may still be on the desk, it is probably next to a modern, computerized radio communications system capable of operating, with or without supportive infrastructure, under the most extreme conditions. 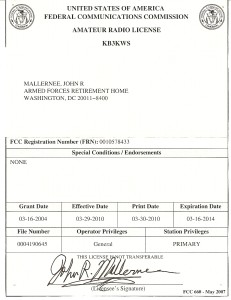 Amateur Radio is as old as radio itself and has been a licensed service for nearly a century, offering a pool of self-trained experts able to provide backup emergency communications. While license application requirements vary by country, the Amateur Radio Service is also controlled by international law and agreements because radio waves do not stop for international borders. In its regulations (Part 97), the Federal Communications Commission (FCC) recognizes the ability of the hobby not only to advance radio communication and technical skills, but also to enhance international goodwill.

Although hams get involved in the hobby for many reasons, they all have in common knowledge of today’s wireless technologies, regulations and operating principles. In the U.S., this is demonstrated by passing an FCC examination for a license to operate on radio frequencies known as the “Amateur Bands.” These are frequency allocations provided by the FCC for use by hams at intervals from just above the AM broadcast band all the way up to microwaves.

What’s the Appeal of Ham Radio?

Some hams are attracted by the ability to communicate across the country, around the globe, even with astronauts on the International Space Station. For some it opens the door to new friendships over the air or through participation in one of more than 2000 Amateur Radio clubs throughout the U.S. Others build and experiment with electronics. Hams are at the cutting edge of many technologies. They provide thousands of hours of volunteer community and emergency services when normal communications go down or are overloaded. All of them enjoy being creators, not just consumers, of wireless technology.

Ham Radio is the ability to communicate — across the street, around the world, or even with people and satellites in space! Even when the power’s out, and the land lines and cell phones don’t work, with a battery, a radio, and a wire, ham radio is there. Ham Radio lets us enjoy life-long friends, and a hands-on technical education. It provides the resources and encouragement to experiment with new things and to design and build on the latest communications technologies. You can’t say that the sky is the limit when there are footprints on the moon! You can go anywhere you want, without boundaries, and amateur radio can help you get there!

On December 5, 2013, Nelson Mandela, the former activist who overcame a nearly three-decade prison stint to become president of South Africa, passes away after years of struggling with health issues. He was 95. "Our nation has lost its greatest son. Our people have lost a father," South African ... [...]