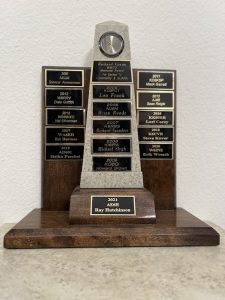 The Richard Coyne WW7D Memorial Award was created in 2005 to recognize an individual SOARA member who had made an outstanding contribution to the club and the HAM community throughout the prior year. The award is traditionally presented at the annual SOARA Holiday party and banquet in December.

The rotating award was created by the SOARA Board in memory of Richard Coyne WW7D, a very active member of the HAM community, longtime SOARA member and past SOARA board member. Richard passed away unexpectedly in May 2002. Richard would certainly been a worthy recipient of the award that bears his name.

On December 5, 2013, Nelson Mandela, the former activist who overcame a nearly three-decade prison stint to become president of South Africa, passes away after years of struggling with health issues. He was 95. "Our nation has lost its greatest son. Our people have lost a father," South African ... [...]